Before I had children it was not unusual for me to leave it up for many weeks, even months.
Once, my tree remained until Easter! (It also helps to preserve the tree if you keep your thermostat very low.) But my son’s birthday is mid-January, and remembering how my sister never seemed to like that her birthday was tied up in the Christmas holidays, I have always made sure to get the tree and decorations down and put away before his big day. My son is grown and lives in his own home, but I have maintained that habit and it’s for the best.

When the tree was totally uncovered of decoration, I put in out in the yard for the animals.
Birds and small mammals will seek shelter in its branches and leaves, resting, staying warm, and hiding from predators. For a while it will stay near a bird feeder; hopefully I will be able to use it as a prop to get some good photos. Eventually it will be taken back to my large brush pile, where it can continue to provide shelter for birds and other animals.

How do you feel about your Christmas tree? Do you put one up? Did you put your tree out in the back yard for the animals to enjoy? I’d love to hear your comments. 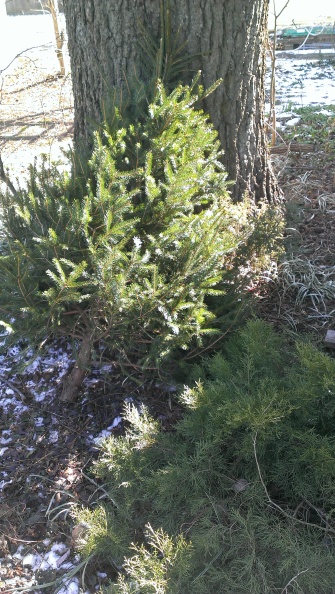 This was no National Geographic photo shoot: there I was, on my belly on the pantry counter, camera lens stuck out the open window into the 11°F early morning air, trying to focus on the RED FOX SPARROW just outside. Two of my cats were trying to squeeze their way out of the slightly open window,  while my husband traipsed back and forth in the nearby driveway, crunching noisily on the ice and snow.  I admit, the photo probably shouldn’t be published, but hey, a Red Fox Sparrow, five feet from my kitchen is newsworthy in my opinion.

What a beautifully colored bird. The Red (or Taiga) Fox Sparrow (Passerella iliaca iliaca) is our eastern subspecies of the Fox Sparrows. “Slate-colored”, “Sooty”, and “Thick-billed”, the other three of the four main subspecies, are all found in specific western areas of the United States. I have seen Fox Sparrows before, but not this closely and I think this one was a perfect specimen. Just look at those lovely cheek patches and thick streaking on breast and flanks! Another interesting thing is the coloring of the beak- all yellow on the bottom, and yellow turning to black on the top of bill. Not a bird commonly seen during breeding season, winter is the time we get to spot them scratching about in the leaves on the ground, searching for food. This little bird was hanging out with several White-throated Sparrows (Zonotrichia albicollis) here in my yard, a fairly northernmost part of it’s winter range. How nicely it blends in with the snowy winter landscape.

My Tweets
How to Get On
looking closer...

My life's aspirations, inspirations and a little bit about running :)

Nature Through My Lens

capturing the world we live in

A spotlight on nature and the outdoors, blurring the lines between photography and art

All About Birds
View from the Cape

The Art and Craft of Blogging